The Museum of the 20th Century

“The Museum of the 20th Century and Its Urban Integration” is an ideas competition for a new museum dedicated to the art of the 20th century to be erected between the Neue Nationalgalerie and the Philharmonie in Berlin. The new museum is intended to house art from the extensive Nationalgalerie collection, which is currently distributed throughout various museums in the city. In particular the new building will allow for the inclusion of the Marx, Pietzsch, and Marzona Collections, as well as works from the Kupferstichkabinett. Central to the competition brief were not only an extensive list of requirements for the operation of a museum of this scale, but an equally important consideration of the larger urban and landscape contexts of Berlin and to the Kulturforum in particular.

The Museum of the 20th Century—between Hans Scharoun and Ludwig Mies van der Rohe, between Atrium and Foyer, between historical void and its architectonic-metaphorical bridging—is the built manifestation of “between-space,” yet simultaneously a self-contained form occupying a dynamic connection between history and the future.

Inhabiting a physical and conceptual space between Mies van der Rohe’s Neue Nationalgalerie, renowned as an icon of modern architecture, and Hans Scharoun’s Philharmonie, a building notably developed from the inside outward, the new museum represents an instance of mediation, an urbanistic vision as well as one that embraces architectural history. It is a place of tension and of constructed opposition, in which the extremes and the schisms of the 20th century are manifested and reflected, as are the utopian aspirations of that era.

The architectural concept of the new museum thematizes these schisms, borrowing attributes of the Neue Nationalgalerie, for example, in referencing the signifying grid of Mies van der Rohe in the main entrance area, and connecting this to the design intention of Scharoun and his outward expression of interior movement. The exterior form appears as though marked by both these stylistically expressive manifestations of 20th century architecture, and is at the same time a self-contained proposition, a field of suspension between Scharoun and Mies van der Rohe, between art “before” and “after” 1945, between historical void and continuity. The new museum, initially given the formal plan of an infinity sign, is disrupted by contradictions of circulation, and the moment of the break (before/after 1945) is staged on this imaginary surface division, even while providing a bridge across this critical divide.

How does this field of tension allow the transfer of a spatial program as a conceptual bridge between modern art and satisfying the demands of a museum of the 20th century? The new museum accelerates the physical experience of space in the same way it creates an expansion into the digital realm. It offers islands of lingering and pause, even while providing a continuous movement through the spaces. It reacts to the expanded definition of art in the 20th century with a differentiated spatial program, seeking simultaneously to dynamize the cut-plane between the exhibition (or rather, presentation spaces) and the digital technology distributed therein. Hence, the new museum functions as a mediating instance between the real and the virtual spaces of art, between the specific locations of the cultural “identities” of Berlin and its global, virtual presence.

The spatial program of the museum extends between Atrium and Foyer with formal simplicity, while at the same time the specific use of space is aligned to its dynamic cubature—its collection spaces, functional spaces, and the space for special exhibitions. The museum workrooms dock themselves into corridors accompanying the showrooms: work on-and-with the museum will not be “on display,” but will be observable to visitors as constituent elements of the museum. 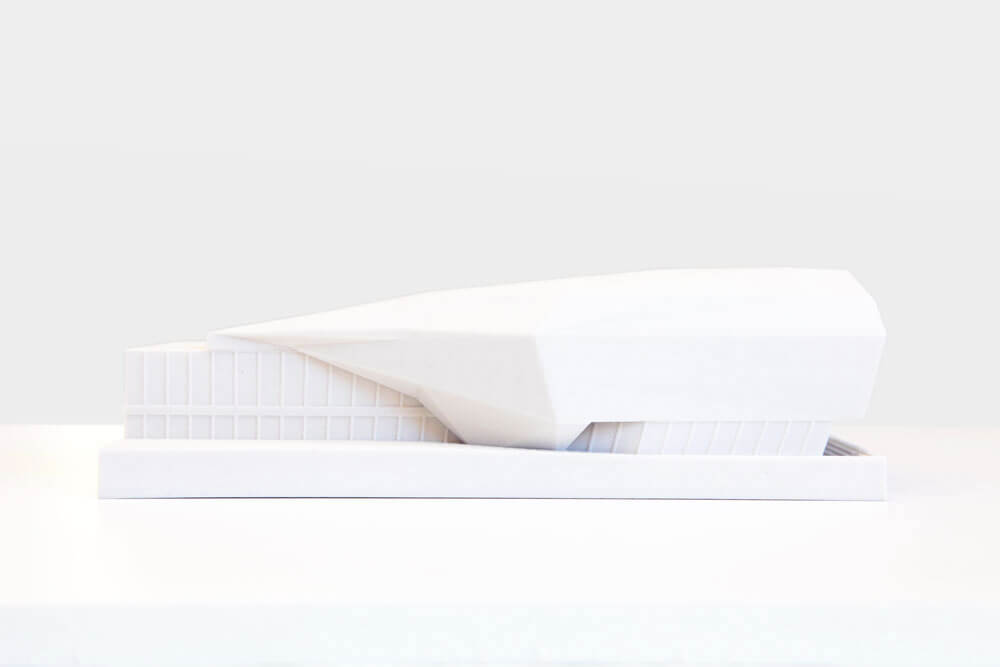 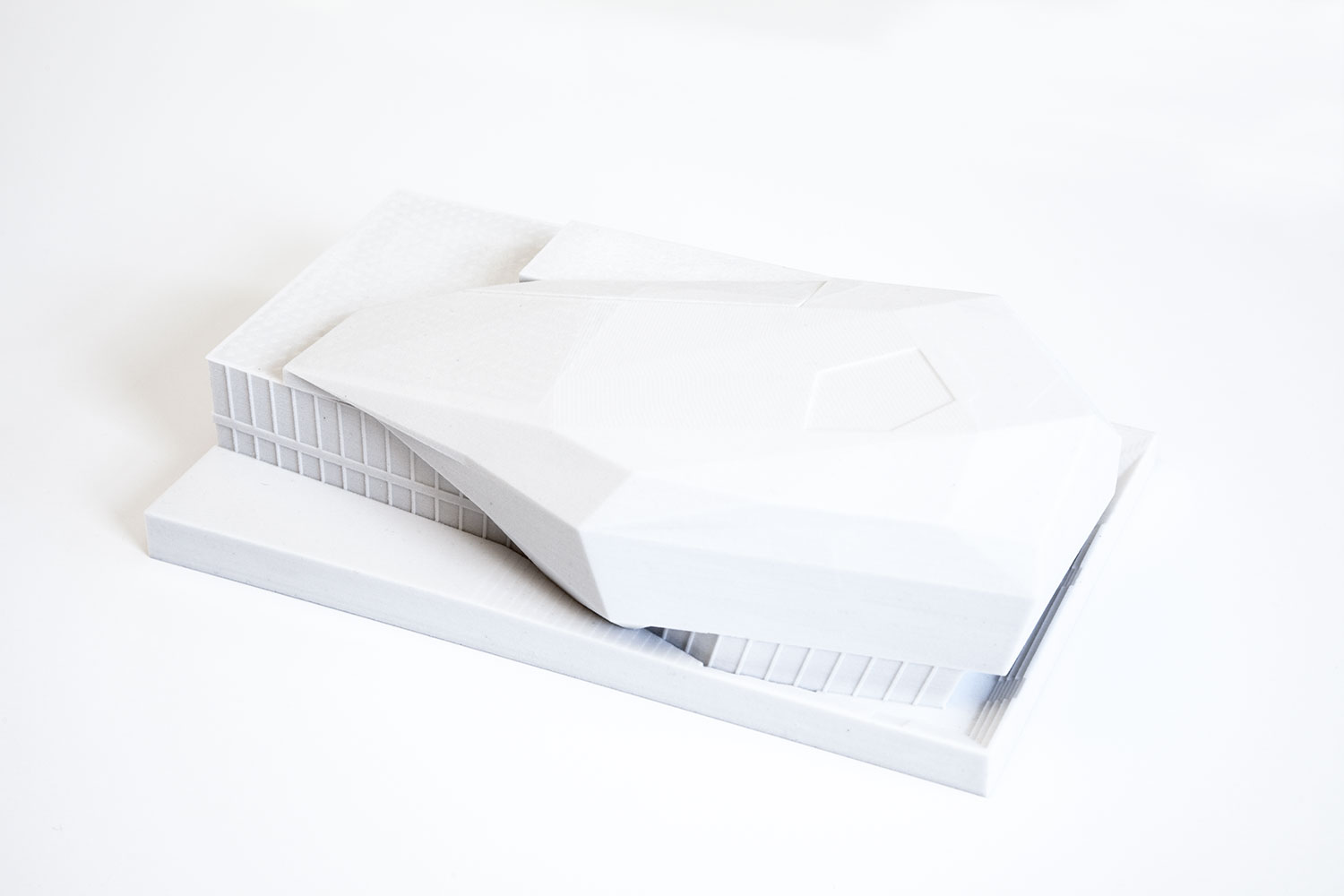 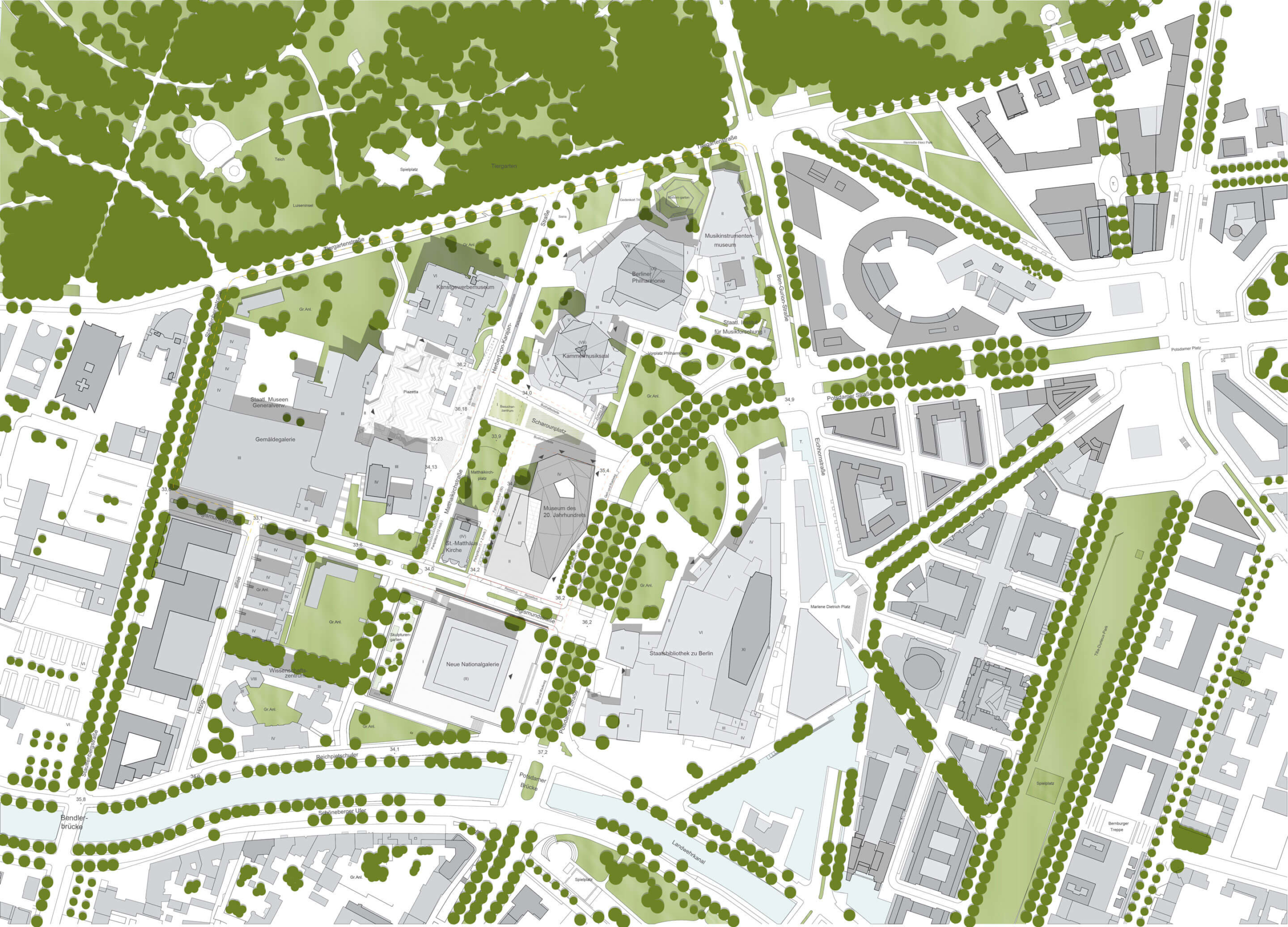 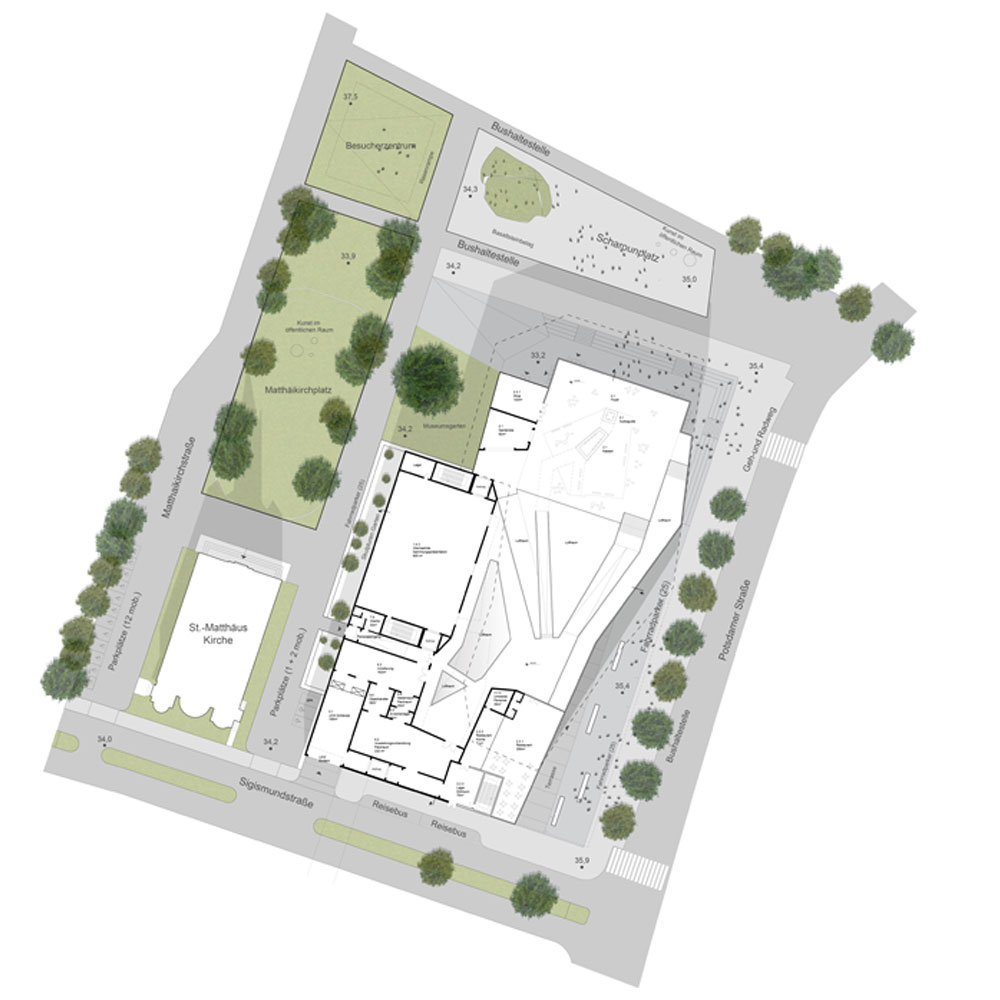 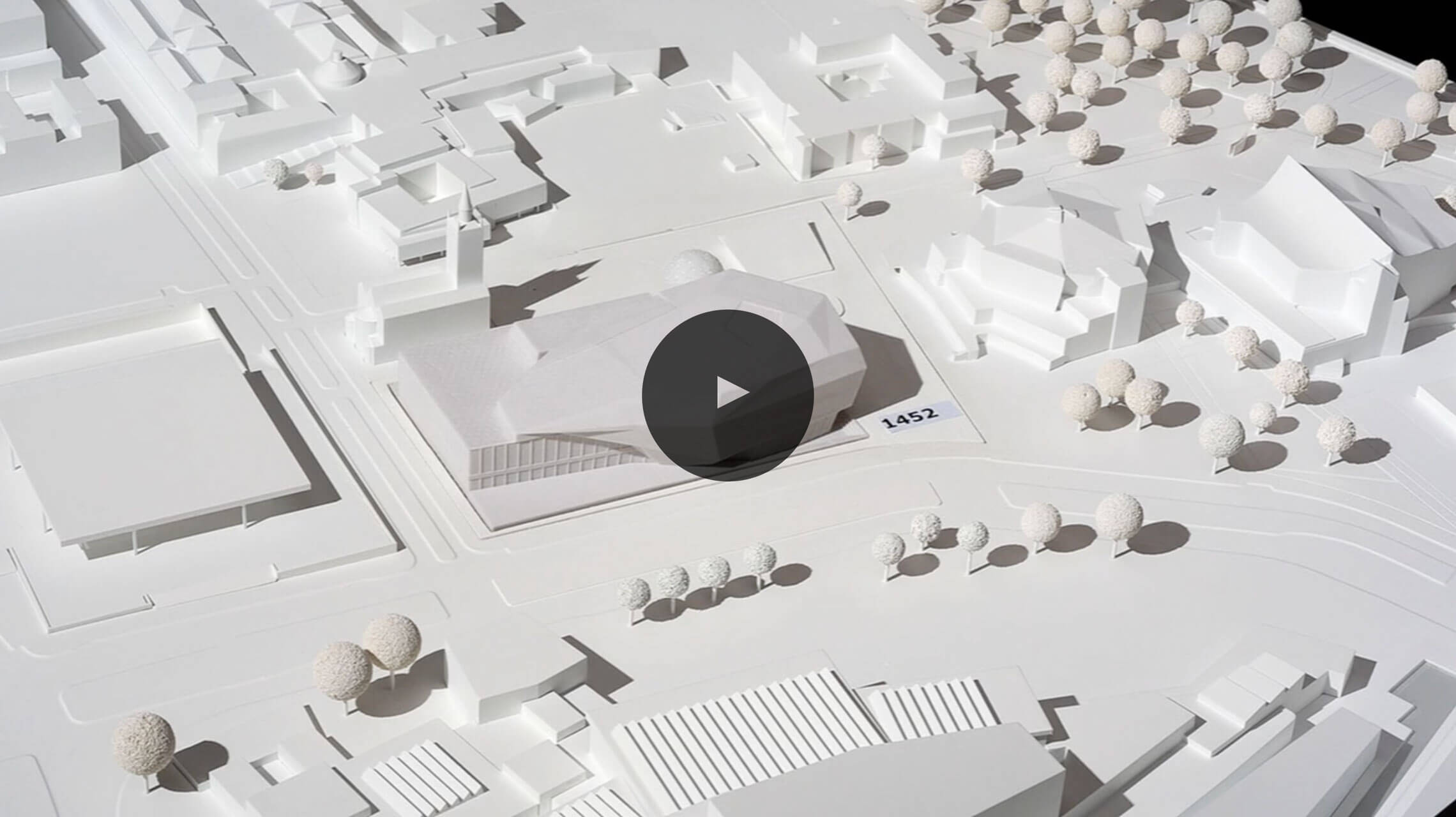 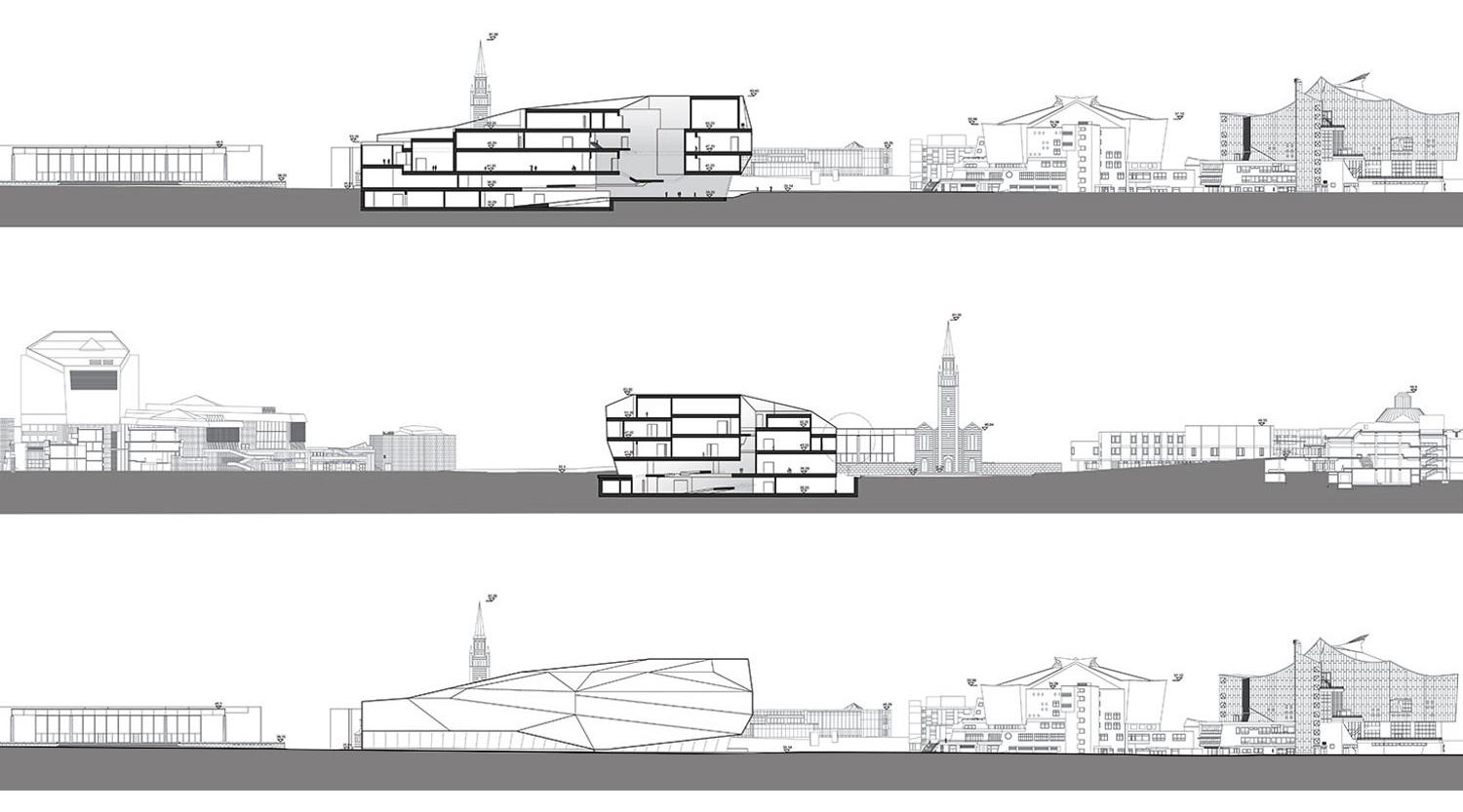 Towards Anarchitecture
Scroll to top